Every year in the United States, an estimated 1 billion square feet of buildings are demolished and replaced with new construction, a statistic that accompanies the replacement of one-quarter of today’s existing building stock between 2005 and 2030.13

Estimates for Canada and British Columbia are not dissimilar, to scale.

A study conducted in 2011 by the Preservation Green Lab, National Trust for Historic Preservation, confirmed that building reuse almost always offers environmental savings over demolition and new construction when comparing buildings of similar size and functionality.13

Accompanied by careful consideration for material selection and efficient design strategies for reuse, retrofitting existing buildings with appropriate energy upgrades offers the most substantial emissions reductions over time and is an option for immediate climate action. The study, which compared a variety of building typologies in a range of USA locations, confirmed a 4-46% in savings for reuse compared to new construction for buildings of the same energy performance level.

Reusing existing buildings can provide communities with an opportunity to avoid unnecessary carbon outlays and a means of achieving near-future carbon reduction goals.13

The impact of savings in reuse at the individual scale may reap minimal benefits, however, the impact of these savings at a city scale is substantial. Scaling up the benefits of carbon savings for building reuse is a known way to meet carbon reduction targets.

The most impactful changes for building reuse and retrofit are in areas where coal is the dominant energy source and where the environment experiences extreme climate variations.

New “energy-efficient” buildings can take between 10-80 years to overcome the negative climate change impacts created during the construction process for a building that is 30% more efficient than an average-performing existing building.13 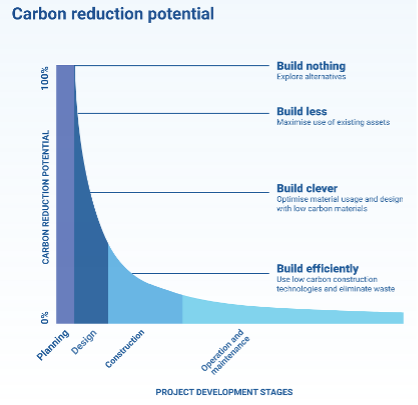 Navigate to the next pages